A lot of guys want to bulk up and add more muscle mass and so they set about reading up on all the different training regimes, diet plans and other methods available to them to do so. While this will often be successful though, in other cases, it just doesn’t work out and they end up giving up a few weeks into their training.

What went wrong? Why haven’t they gained the mass they were hoping to?

Perhaps a good way to find the answer would be to look to examples of people who have managed to gain a lot of muscle mass in a short amount of time. And in that regard, it makes sense to turn our attention to celebrities. Movie stars, in particular, are highly adept at transforming their body shapes for roles and there are tons of amazing examples from Hugh Jackman, to Henry Cavill, to Brad Pitt, to Chris Evans.

So what’s their secret? Why is it so easy for them and so hard for you?

Celebrities have numerous advantages when it comes to getting into amazing shape.

The first is that they actually will very often only get into amazing shape for a short period of time. Hugh Jackman had an amazing physique in X-Men: Days of Future Past. In fact, his physique was so impressive that it rivaled that of a professional bodybuilder.

But here’s the thing to remember: Jackman only had his shirt off for one scene. That means just one day of filming. And it means that his entire training could focus on that one ‘endpoint’. This means he will likely have used a periodized training schedule, involving periods of bulking and cutting and he will have used other techniques like dehydration in order to look his most defined.

Then there’s the advantage of makeup, of lighting and more to help him look even more incredible.

But on top of this, celebrities also have advantages in terms of the way they train. For starters, they are getting paid to workout. This is their job and so they can dedicate large amounts of time to it that we just don’t have. At the same time, celebrities can train using the very top fitness instructors and the very best equipment and supplements that money can buy – advantages we don’t have!

So what’s the lesson here? That we should just give up? Not at all!
The first point though is not to compare yourself to Hugh Jackman. Don’t be disheartened if you don’t get those same results right away, as he had numerous advantages (which is not to diminish the achievement in any way!).

The other thing to recognize is that you will train better if you can fit it into your routine and if you can work toward a set endpoint. Finally, ask for the best advice and be willing to put in the time. It’s not glamorous but behind the scenes rarely is! 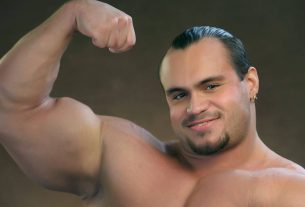 How to Raise Your Testosterone for More Massive Growth